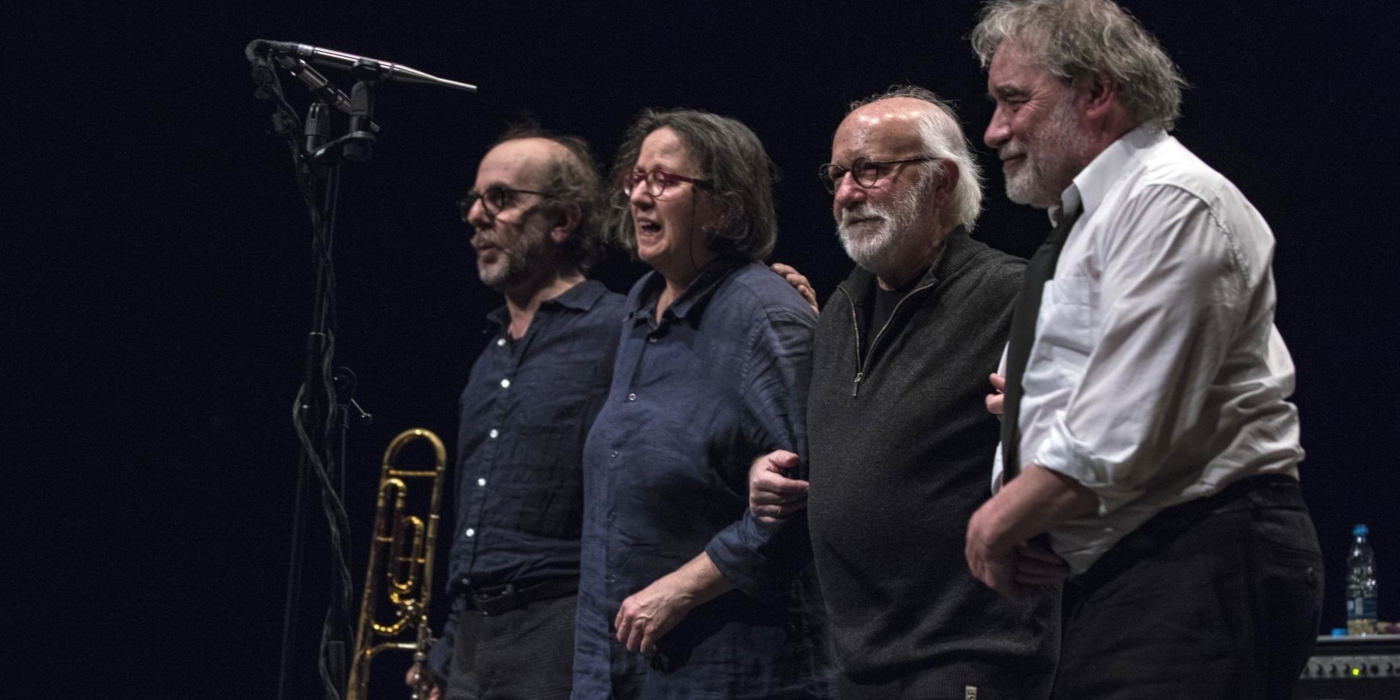 The Sudo Quartet of improvisers came on strong Wednesday night, as Portuguese violinist Carlos Zingaro, French bassist Joëlle Léandre, Italian trombonist Sebi Tramontana, and German drummer Paul Lovens immediately established their collective presence in a display of density and unity. When trombonist Tramontana started to dance around his spot on stage, exuding some unusual sounds from his horn, and then pushed out a flurry of notes as bassist and drummer began to play off each other, it was a sure sign that a wild night lay ahead.

When ensemble musicians saw openings, they took them, offering original sorties to move the group sound ahead. Léandre at one point began shouting as she played bass, later chanting as part of her exploratory effort

Tramontana wailed away on his horn, with violinist Zingaro matched the sound and bassist Léandre supported their track, unusually using both hands to strum and pluck. The whole thing sounded like a Miro painting – many disparate parts on the canvas, but they have a cumulative and meaningful effect. Certainly, his trombone antics – growls, snorts, warbles, etc. – injected playfulness and humanity into the collective improv effort and made this a memorable and fun show. (Irwin Block)

This live recording from a concert in March 2011 at Salle Pablo Neruda, in the Bobigny suburb of Paris, reunites these four old friends for a spectacular set of five improvisations. As can be imagined, all four are aware of each others' personal characteristics and know the best dynamics for such a setting; still, the interplay sounds fresh, intense and risk taking. There is no obvious narrative, no dominant leader and no rhythmic pattern; instead, careful yet instant development of myriad ideas flow, a sonic research of the timbre and sounds of the instruments with a flair for drama and irony.

The tension is accumulated on the first and longest improvisation, the 20-minute "Sudo 1," through brief, complementing articulations, but at the same time these sonic gestures subvert any attempt to turn them into grandiose structures. Dissonance, surprising turns and humor are used, especially when Léandre adds her operatic, gibberish vocals. "Sudo 2" begins as a loosely structured chamber trio suite challenged by an imaginative pulse maker, but is soon reconstructed with spare and abstract interplay. Both improvisations stress the political aspect of free improvisation: resistance surrendering to any musical conventions or structure; a healthy skepticism of all sonic expression; and an admirable insistence to create music that demands full attention and commitment.

The remaining three improvisations are much shorter, with "Sudo 3" an energetic burst of ideas. "Sudo 4" is relaxed reflection on past improvisations, highlighting the telepathic interplay between all four, while "Sudo 5" is a remarkable conclusion of this sonic journey, somber and thoughtful in spirit, as if regretting that this sonic journey had to end so soon.

An exemplary, free-improvised performance. (Eyal Hareuveni, All About Jazz)